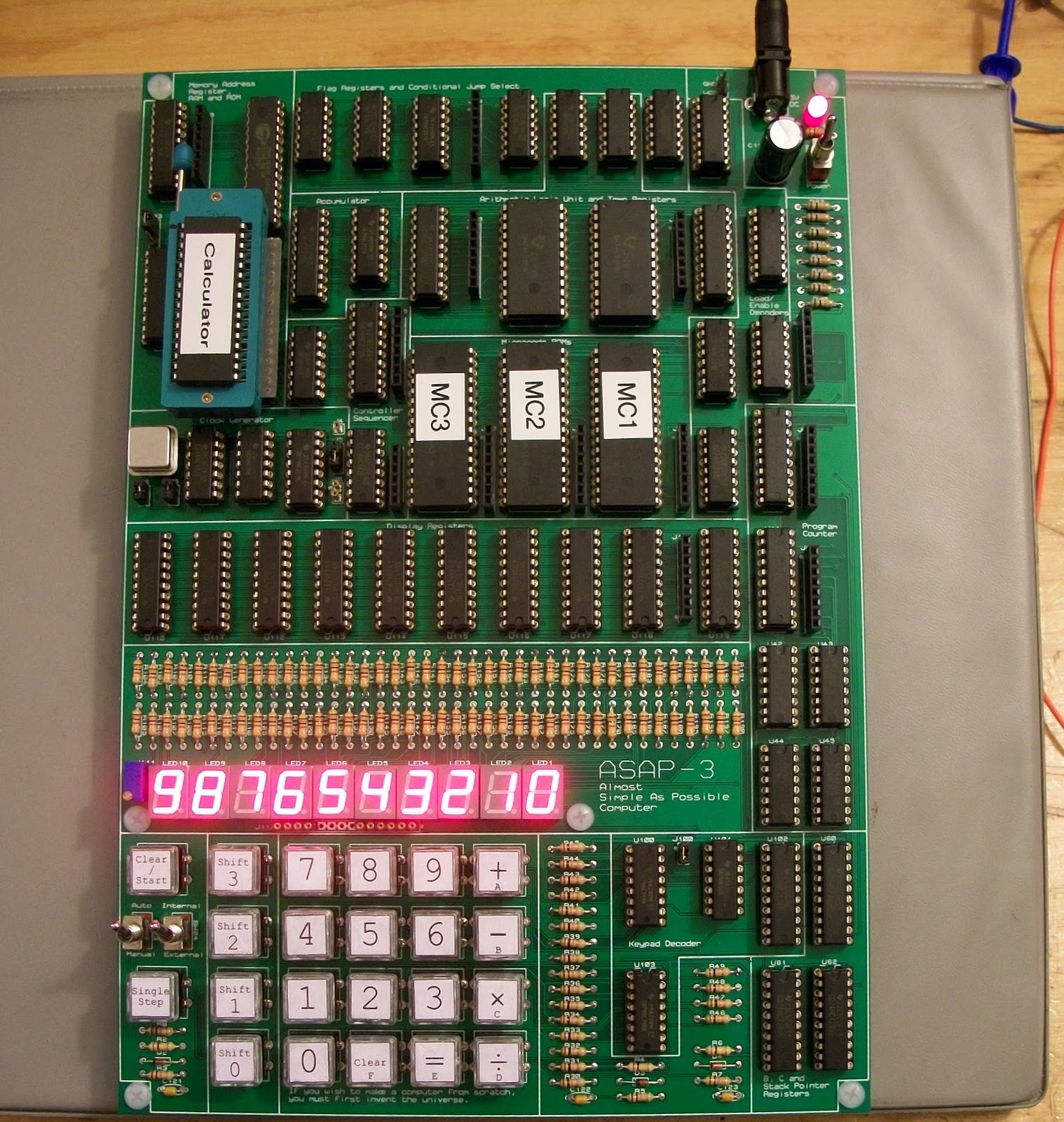 The ASAP-3 is a computer/microprocessor made of discrete TTL logic chips.  It is based upon the SAP-1 (and 2 & 3) computer as described in Digital Computer Electronics by Albert Malvino.  It is an 8-bit computer and uses 55 chips to carry out its function.

Picture album of the assembly of the circuit board.

Picture album of the schematic diagrams.

A .rar file containing the schematics, ROM binaries, source code for the calculator program and an explanation of the instruction set.

The schematic was made using  Proteus Design Suite 8.0.  A demonstration version can be downloaded from the website and can be used to view the schematic file and run a simulation of the hardware.


Calculator program with a LED output:

Calculator with a LCD output:

Running with a slow clock and probing the instruction register:


I have been fascinated by projects like Magic-1, Big Mess o' Wires 1, The Duo Series and MyCPU but wanted to build something on my own.  While the schematics are available for several homebrew computers I didn't have enough knowledge to take those and start building.  My research lead me to the SAP-1 design.  Playing around with digital circuit simulations I was able to start making something I actually could understand.  Eventually I decided on building a 4-function calculator with a keypad input and 7-segment output.  The design was simple enough so that it felt like it could be accomplished on my own while giving a tangible result that was more than just some flashing LEDs.

Simple ≠ least amount of chips.  The display could probably be made with a multiplexing type array which would take much less PCB space.  The software side would be more complicated, and my simulation doesn't have animation faster that about 20 fps.  However, with all I have learned about programming it would probably be doable now.  The keypad could be replaced by a PS/2 keyboard and some shift-registers, again shrinking the PCB footprint significantly.  And most damning, it has been shown you don't need a bunch of chips to do interesting things!

Not having much knowledge about programming, it turned out to be almost as complicated as the hardware.  Everything was written in machine code then manually entered into a binary file.  This made for a very time consuming and inefficient way of writing and updating the program.  Doing everything first with the simulation saved a significant amount of time. 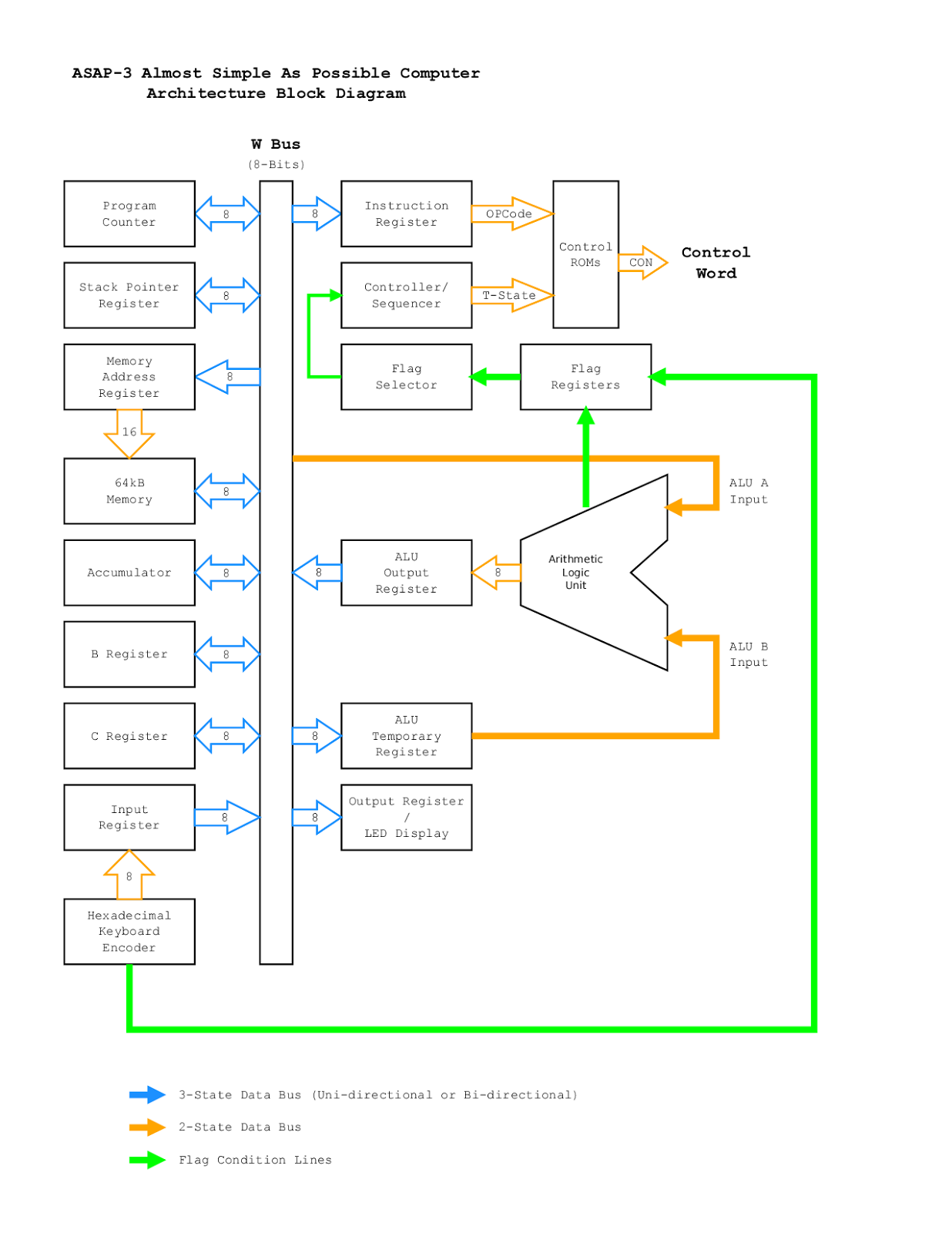 
The CPU speed is limited to 500kHz.  Somewhere between 500kHz and 1Mhz some instructions stop working, notably conditional calls and jumps.  At 2MHz and above it seems to stop working altogether.  I don't have a logic analyser so I can only speculate as to the exact cause.  I ended up bread-boarding some of the controller/sequencer and found (with my oscilloscope) that when changing between certain ranges of address, the outputs of the ROM will have a momentary glitch.  These glitches are enough to trigger the asynchronous set or clear inputs of flip-flops and registers.  So basically any input that is not synchronous with the CLK signal is vulnerable to being erroneously triggered (Like the /NOP signal).  Buffering each control word with another register that filters out these glitches may help but this complicates the design.

The tactile switches in the keyboard bounce significantly and don't always get decoded properly.  Pressing hard then releasing quickly minimizes the issue.  Also a significant software delay must be used before resetting the keypressed flag or the still bouncing switch will re-trigger it leading to a double input of the same character.

The switch that changes between an external and internal clock cannot be used while the computer is running. As it doesn't have any de-bounce circuitry, it will actually induce the bouncing into the clock signals.  If you switch to an external clock source while it is running some of the registers can latch up causing a crash.  Also, I should have wired the switches so the Auto/Manual switch overrides the Internal/External switch.  As built, while in external clock mode you cannot switch back to single step mode.

During simulation in Proteus Design Suite, I found that the carry bit from the 74LS181 model did not propagate correctly for certain operations.  This lead to weird results if subtracting two numbers and there was a carry between the upper and low nibbles.  It was fixed by emulating the function of a 74LS181 with a ROM acting as a look-up table for every possible combination of inputs.


Overall this was a very humbling experience.  I have spent the majority of my free time over the past year learning about digital electronics, CPU design and programming with machine code and the end result is a device that doesn't even have the functionality of a 99 cent pocket calculator.  And I definitely could not have accomplished this modest height without the extensive knowledge written by those who came before me.  It definitely makes me appreciate all the technology one has at their disposal today.
Posted by Pong74LS at 11:05 PM